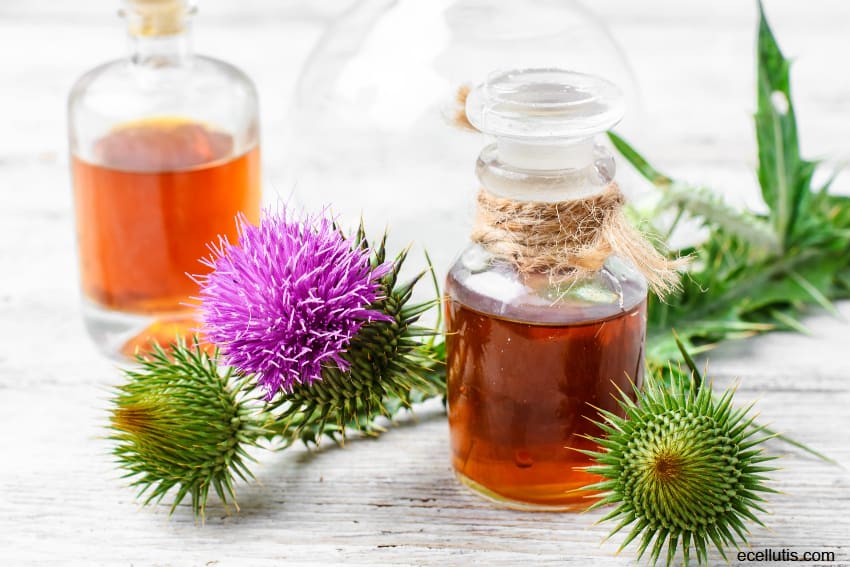 Burdock, a short biennial plant and native to Northern Europe and Siberia, is popular as gobo in Japan.  However, the burdock plant is an easy growing hard plant that grows wild almost everywhere in the world.

It is part of the family Asteraceae, of the genus of Arctium. It can grow a meter in height, with broad heart-shaped leaves. In summer, one can see reddish-purple flowers that will turn into seed-heads. The deep taproots are brown with white flesh and shaped like carrots.  Only two species are cultivated for their herbal parts. The flavor of the burdock root resembles one of parsnips and artichokes.

The important thing is that almost every part of the plant is used for culinary and medicinal purposes.

From ancient times, burdock root has been a part of traditional Chinese medicine, especially the seeds that are known under the name niubangzi. Herbalists used burdock root because dried burdock has diuretic, and blood purifying properties.

In a word, burdock is a traditional medicinal herb. The seeds were used to treat arthritis, throat pains, and the common cold. The root was a remedy for rheumatism, gout, acne, eczema, and psoriasis. It was also a popular remedy for snake bites. 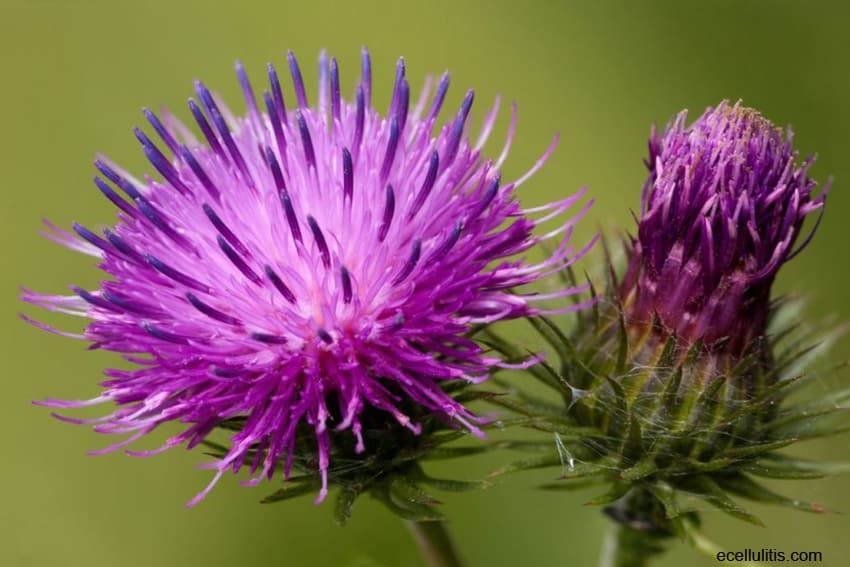 Due to its detoxification and purifying ability, burdock cleanses the body of bile and eliminates the toxins that are the cause of skin infections.

Researchers found that burdock root has antifungal and antibiotic qualities that help fight bacteria and fungi that infect the cracked skin. Root also has diuretic properties that can eliminate impurities through the digestive tract, thus the skin becomes safe because the toxins are not expelled through it and they cannot cause the infection.

The plant increases circulation to the skin, therefore, it helps detoxify the epidermal tissue as well.

As for the dosage, traditional herbalists suggest taking burdock root in capsule form. The treatment includes 1 to 2 grams three times a day.

For acne treatment, one can also make tea with burdock and dandelion root.

Bur oil is obtained by direct cold extraction and it has a mild attractive aroma that comes from the volatile root ingredients. Bur oil or burdock root extract is used to treat dandruff due to the essential fatty acids and phytosterols. 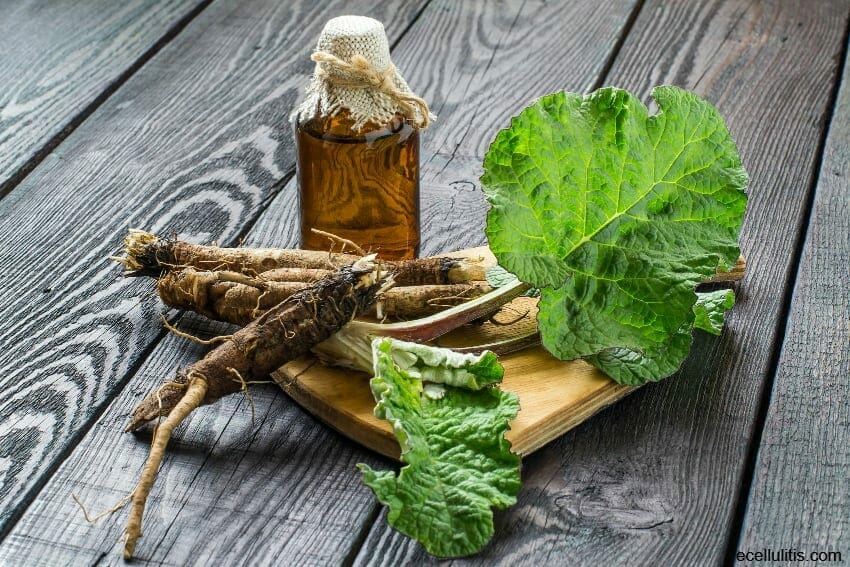 In particular, burdock root is used to treat scalp psoriasis, a chronic skin disorder that can affect the scalp, forehead, or neck. Since burdock root stimulates the digestive system and improves bile secretion, it can help with removing toxins that may trigger bouts of scalp psoriasis.

Due to the fatty acids and phytosterols, bur oil promotes hair growth. This oil supplies these compounds to hair roots, thus reduce hair thinning. It supports the normal function of sebaceous glands and hair follicles.  The treatment for hair includes gentle massage into the scalp and regular usage. It is usually applied before bedtime to let stay overnight, or after the hair wash to help moisturize and nourish the scalp.

For additional benefits, one can combine it with nettle oil extract.

Burdock root tea is one of the easiest ways to prepare a remedy from this plant. The maximum benefits one can gain by drinking this tea three times a day. The benefits from the tea are numerous, but one of the most important is listed below.

• Burdock is a natural diuretic and is used to treat hypertension. Tea helps increase the flow of urine from the body. It can also reduce the risk of stroke and heart disease.

On the other hand, it may cause dehydration if one is not careful.

• The tea helps with lowering blood sugar levels in the body.

• The herb is an effective remedy for irritation that accompanies the premenstrual syndrome. The tea might relieve the pain.

• It helps as a remedy in different cancer treatments. However, more research should be done to approve its benefits entirely.

• Burdock tea helps treat skin irritation (acne, psoriasis, eczema, boils) when applied as a compress. If you use it in the treatment, omit any sweeteners or other flavorings. 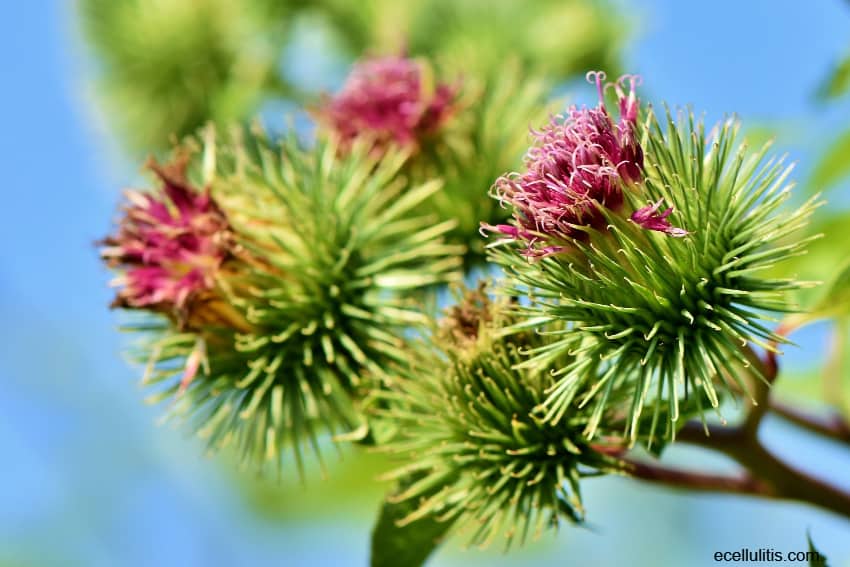 One can make burdock root tea by steeping 2 to 6 grams of powdered or sliced burdock root in 2 cups of boiling water for 15 to 20 minutes. Lemon, honey, or sugar can be added to it.

Side Effects of Burdock

When consumed as a food, burdock has no side effects. However, it may induce an allergic reaction in those who are sensitive to daisies or ragweed.

Signs of the allergic reaction include difficulty breathing or swallowing, or facial swelling.

One should not use burdock in conjunction with other diuretics and during pregnancy and breastfeeding.

In patients that are on potassium-sparing diuretic therapy, it may aggravate potassium toxicity.