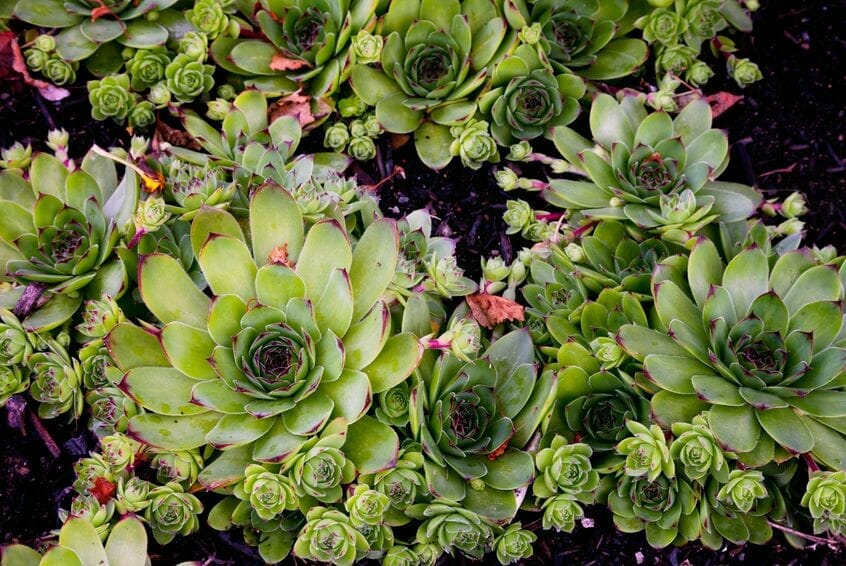 Romans used to plant it in front of the windows because they believed this plant was a love medicine. Others believed that this plant could protect them from witchcraft and thunder. For centuries, juice made from houseleek has been used for skin and eye treatments.

Most of us are familiar with houseleek and undoubtedly many of us have seen it or, at least, heard some of the stories and legends surrounding this plant. Many different cultures and civilizations were familiar with this particular plant; thus various stories they produced seem to discover the popularity and necessity of houseleek.

The very first interesting thing that sheds some light on this plant’s popularity stems from its various names. Houseleek or Sempervivum is a genus of about 40 plants in the family Crassulaceae. The Latin name Sempervivum tells us a lot about the characteristic of this plant. The name is formed of two words: Semper that means “always” and Vivus that means “living,” indicating that this plant is perennial, and that can grow in challenging conditions.

It is believed that if you plant houseleek on the roofs of the houses, it can protect you from lightning strikes.  Some people called it Thor’s beard indicating the name of the Norse god of thunder, Thor, and other Jupiter’s beard. It is also known as devil’s beard, Jove’s beard, St. George’s beard, and bullock’s beard. The most interesting name is certainly Welcome-home-husband-though-never-so-drunk, that shares with a plant Sedum acre.

The origin of this genus in Mexico but it can grow almost everywhere: in the Carpathians, the Alps, Balkan Mountains, Sahara deserts because it can store water in the leaves.

The particular plant from this genus we are writing about is Sempervivum tectorum and this specie is the most popular one. This plant has small and thick leaves that form a rosette. It can grow up to 15 centimeters tall, and 50 centimeters broad, with beautiful red flowers that bear in summer. This plant is resistant to drought and high temperatures and today is a famous garden plant. 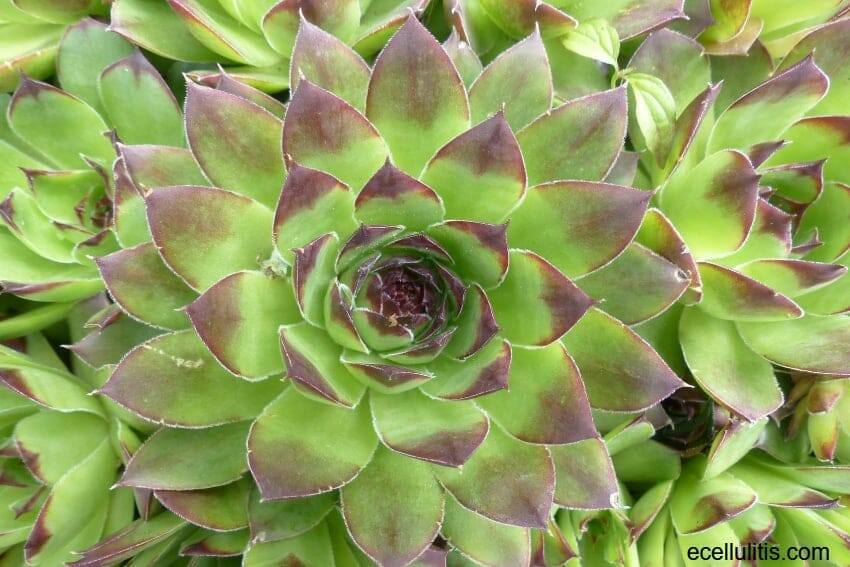 This plant has two significant benefits; it is on the first place famous for its skin treatment, in particular burns, and for the treatment of the earache, and ear pain in general (otalgia). Moreover, the juice made from houseleek leaves is also a very famous immune system remedy.

The effects on the skin that houseleek has are very similar to those of aloe plant. Moreover, it is considered one of the safest natural remedies for skin infections and different conditions. Besides, houseleek is a very popular skin remedy because it almost has no side effect and those that might occur depending on other conditions.

Skin healing can differ; one can use juicy fluid from the leaves, crèmes, or tinctures. Until know, houseleek has been very lucrative in treating burns, sunburns, insect bites, and frostbites. Moreover, one can treat redness, swelling, scratches, abrasions, and other inflammatory diseases.

For years, even known to an ancient civilization, houseleek has been used to treat otitis and hearing loss and damages.

Although cerumen protects ear canal in general, as well as from bacteria, fungi and water, and assist in lubrication, impacted cerumen can press against the eardrum, threaten the external auditory canal, and cause conductive hearing loss.  The juice of houseleek leaves can dissolve cerumen, thus ease the pain in general.

The best treatment is quite simple; squeeze some drops of the juice in the ear. If the pain is severe, one can soak cotton wool in the juice, place it in the opening of the ear, and leave it for several hours. 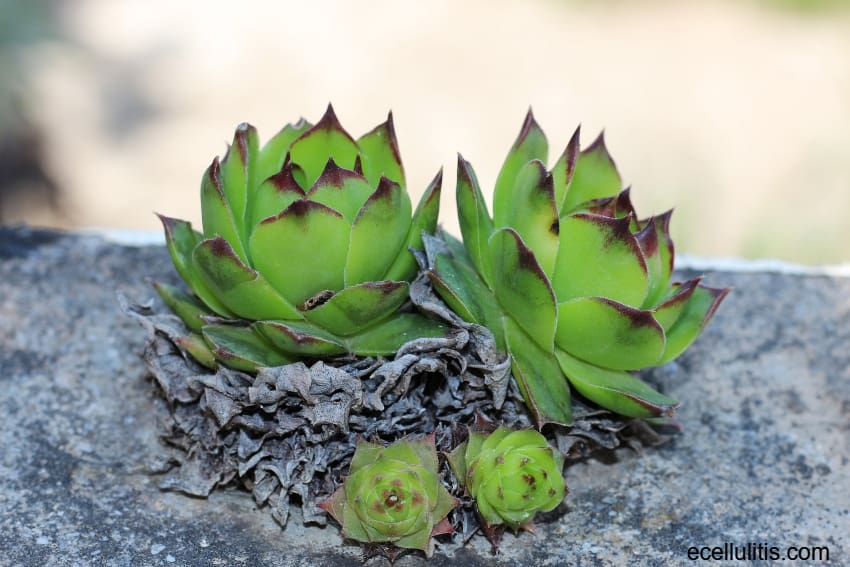 The science confirmed that houseleek is rich with polysaccharides and other antibacterial ingredients that are very efficient in protecting the immune system. Similar to the aloe plant, freshly squeezed juice from the leaves is used to treat the nervous system, especially nervous derangement, many unrealistic fears, and falling sickness.

The juice is also a remedy that can remove warts, treat open wounds and sunspots. Moreover, it can help relieve the pain from insect bites. When mixed with honey, the juice is used to treat soreness, ulcerated conditions of the mouth and bronchitis, while the mixture with honey and hot water can bring down the temperature or a fever.

There is a difference in usage between houseleek juice and tea. Although both are very efficient and lucrative, tea is especially good for heavy periods, menstrual cramps, and ulcers.

It is very easy to prepare a houseleek tea; one should add 12 grams of dried leaves or 10 grams of fresh leaves into 4 liters of water and cook it for 15 minutes, then strain it and leave it to cool down. One should drink one cup of tea early in the morning on an empty stomach. After that, take one tablespoon of tea every hour.

Daily Dosage and Side Effect

A daily dosage of houseleek depends on the user’s age, health and other conditions.  As for the side effects, some people can be allergic, but that is very rare.